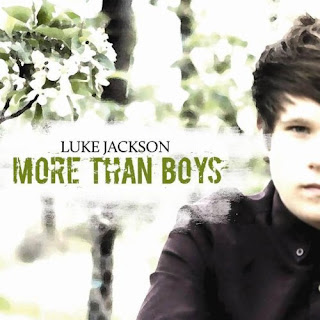 How old was John Lennon when he wrote Strawberry Fields Forever? Twenty-six? Twenty-seven? Dylan wasn't much younger when he wrote Bob Dylan's Dream. Luke Jackson is 18: presumably he was 17 when he wrote most of the songs on this album. There are lots of growing up songs and growing up poems and growing up stories in the world. (Some people say that all stories are growing up stories.) But I am struggling to think of another example of a singer who has written a good song -- a whole album of good songs -- about growing up while they are still living in that moment;  a 17-year-old telling us what 17 feels like from the inside.

It's quite hard for me to put into words just how much I like this album; it's so unselfconscious and honest that analysing it feels like using a sledgehammer to describe a spider's web. When Luke signed my copy of his EP at the Frome festival, I said "Your songs are very true" and I'm not sure if I am going to think of anything more helpful to say in the next few paragraphs. At the Trowbridge festival I heard a nice man in the club tent singing a nice version of John Denver's nice song "Will I Ever Catch Another Butterfly" and I caught myself thinking: none of that is true, you didn't really think that, you just wrote it down because its the sort of thing people say about their childhood in songs. But when Luke sings...

Hours in our hideout, safe from the winter breeze
Yes and I, well I wonder if it's still standing up there, at the top of Old Wives Lees
And it's where we'd talk about our first loves, with our hearts worn on our sleeves
It turned out we were far too young, to really know what any of that means...

...I instantly believe it, and instantly know what he's talking about. The most personal is always the most universal: we all have our own Bakers Woods, Old Wives Lees and Kitchener Roads, and we all have moments when we long to return to them. But although there's a wistfulness to these songs, they never become mawkish. The singer regrets the passing of his days of doing nothing in the park ("It seems like all my childhood songs have been sung") but suddenly interrupts himself mid-line to wonder about "the person I will be". It's that shift from looking back to looking forward which raises the songs several notches above the merely sentimental.

I've said before that what is most affecting about Luke's live performances is the way that he shifts between lyricism and ordinary language; a deep, mature, astonishingly pure singing voice, but songs which are phrased like day-to-day speech; chatty local turns of phrase ("six young men had a day down the lakes" "down by the rec where he spent most his time") which are embedded in little poems. These are the kind of songs which seem to catch a thought at the moment at which it happens. We seem to hear the singer doodling away on his guitar, maybe resorting to some slightly conventional singery songwritery language ("made me smile to hear the birds singing the sweetest lullaby by / the world was looking fine, oh so fine, through my eyes") and then suddenly realising what he has to say --

down at the wood side with my two allies,
none of us sure how to spend our time
thinking about life, and so we climb, oh we climbed

My two allies. That nails, that pins down, that captures the flavour of boyhood friendship perfectly. "I'd do anything just to climb, side by side, one more time, with my two allies." Perfect.

I wouldn't like to choose a favourite song. Clearly and rightly he's pushing "More Than Boys", the title track as a possible "hit". But I think the cleverest and most complex and moving thing on the album is "How Does It Feel?" Someone who can speak music can maybe explain the melody better than I can: the opening stanzas with their long, meandering lines "...she has bloomed to your girl and your have the ambition for her to try to conquer the world..."; the refrain which keeps changing direction and catching me out, but which has an almost hymnal quality about ("how does it feel to see your children grow and face the world?") and just when he think we're finished, the simple and wise full stop:

you have been here before, with your bag, beer and fags you decided to sneak out the door
but they stayed to watch you grow, gritted their teeth as you became someone they didn't know.

I think that catches a really powerful and universal moment: seeing yourself as an adult for the first time because you can see for the first time that your parents were once children. And it's one of those melodies that I don't want to listen to very often in case I spoil it.

One of the things I like most about folk music is the way in which each performer seems to invite you into their own little world of interconnected songs. This album draws you into a landscape of orchards and broken bicycles and muddy rivers and playing fields and fishing lakes; on the border between the city and the country; a very modern, very English pastoral that's both happy and sad because our guide realises that he's leaving it behind. I've been milking the gag about folk songs being about how much better things seemed in the olden days for far too long. These are songs written in the space between the olden days and the future:  honest, wise and very, very true.

Really heartening to read a review that celebrates Luke as the stunning writer that he is right now, rather than just talking about his 'potential'. The lyrical, musical and emotive qualities of these songs are astonishing, and the whole sound just rests comfortably on his impressive authentic voice and guitar, with no fancy production needed.
Cheers, yer star, Brigs :)

Hmm, £10.99 on Amazon. Seems like a bit too much to gamble. Maybe I can find the album on Grooveshark and audition it that way. Anyhow, a very appealing review.

You could try here...

It's immediately obvious that he's an excellent guitar player. His voice is less convincing. But the real make-or-break is the songwriting, and it always takes me a good few listens to anything before I can really wrap my head around that.

Anonymous said...
This comment has been removed by a blog administrator.
5:30 PM

Anonymous said...
This comment has been removed by a blog administrator.
10:44 PM

LISTEN TO MY PODCAST

Or you could even buy a whole book of them here.

I will write in return for money, or indeed, free DVDs or concert tickets. If this interest you, please e-mail me here

I am a freelance writer. If you enjoy one of these essays, please consider donating £1.