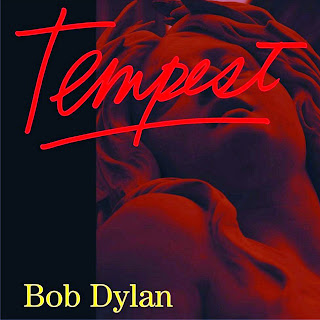 Tempest is a very nice album.

I think it is the nicest of the five albums which Bob Dylan has made since resuming song writing in 1997. (Christmas in the Heart doesn't count.)

I think it is probably the nicest thing he's done since Blood on the Tracks.

I liked it very much indeed.

Bob says there is no significance in the title. This album is called Tempest. Shakespeare's last play was called The Tempest.

But if Tempest should prove to be Bob's final album then its closing lines, addressed to a mysterious figure identified only as "John", would serve very nicely as a final curtain-call for the Poet Laureate of Rock and Roll.

This is also how Sociology works.)

I rode with him in a taxi once


But that works only if you know in advance that "John" is John Lennon, and are trying to retrofit the solution to the riddle. And the song isn't a riddle. It's a song.

It's a song about a man who travels from England to America, who is killed in an ambush, possibly in Texas, and whose death makes lots of people very sad. The atmosphere and melody, as well as some of the lines, strongly recall Knockin' on Heaven's Door – a not inappropriate song to evoke when talking about a man who was shot in the back. But having drawn the line from Tempest to Pat Garrett and Billy the Kid, I can't help hearing echoes of Steve Tilston's fictitious Billy the Kid in the new song. Compare:

account of all the husbands and wives and little children who lost their lives. There certainly was a rich man named Mister Astor on Titanic. Davey the brothel keeper is rather harder to track down. Leo, the mad artist who painted whatever was in his head, is a reference to Jack Dawson, the perfectly sane artist who painted naked women, who didn't exist, and was played by Leonardo Dicapprio in the movie. Cleo is there because she rhymes with Leo. We aren't told if any of the uncles and aunts and the nephews lost their pants.

is clearly using Guthrie's song (Great Dust Storm or Dust Storm Disaster) as a model. Both songs are waltzes; both songs are very long. Both convey the scale of the disaster by piling up individual facts and stories. Both use religious imagery. And there is a rather more obvious connection which explains why the album is called Tempest and not, for example, Iceberg.

This is all straight out of the Redemption Hymnal. "When the roll is called up yonder" is an inspiring ditty about the end of the universe ("when the saved of earth shall gather over on the other shore and the roll is called up yonder, I'll be there"). Charles Wesley's great hymn And Can It Be... talks about the angels being unable to look directly at the wounds of Jesus. The synoptic Gospels all say that when Jesus Christ died, the veil in the Holy of Holies was ripped in half. Traditionally, Jesus died at 3PM on Good Friday, but the land was said to have been dark between 12 and 1. I don't know whether Bob is saying "the sinking of the Titanic was like the death of Jesus" or "I want you to feel some of the horror and sense of gravity that a devout Christian would feel reading the story of the Passion". Perhaps it's just that he likes the idea that his fictitious "Titanic" is dragged, not to the bottom of the sea but through a rent in the fabric of space and time -- out of the universe itself, into the underworld -- and felt that "the veil was rent asunder" is a nice phrase to describe that.

The idea that the Crucifxion of Jesus took place on April 14th is common enough to have a handy theological nick-name: "quartrodecimism".
The Watchman is referenced four times in the song; it's almost a refrain. On the third occasion we're told

"Thou fool: this very night they life is required of thee".

The was a movie, itself replete with apocalyptic imagery, which began and ended with a Dylan song and had a Dylan song in the middle. The title of the movie was Watchmen. And definitely not the Watchmen. 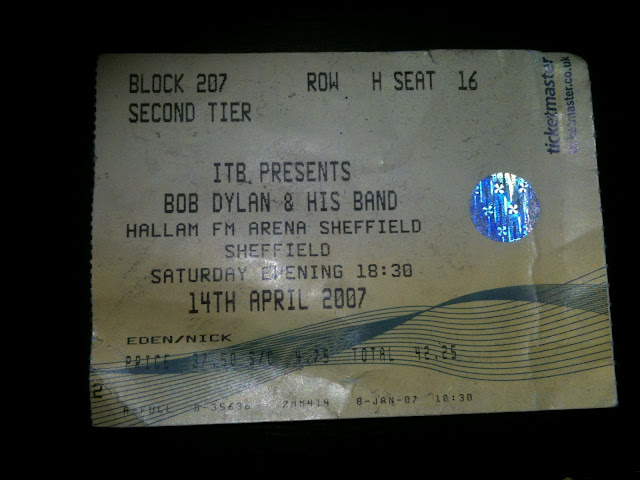 April 14 also happens to be the date Abraham Lincoln was assassinated, something Dylan knows but may have chosen not to reference. (It means quite a bit to us USAians.)

Of course...! Which means that we now know who "the captain" represents... ("Our fearful trip is done / the ship has weathered every rack / the prize we sought is won" etc etc)

LISTEN TO MY PODCAST

Or you could even buy a whole book of them here.

I will write in return for money, or indeed, free DVDs or concert tickets. If this interest you, please e-mail me here

I am a freelance writer. If you enjoy one of these essays, please consider donating £1.